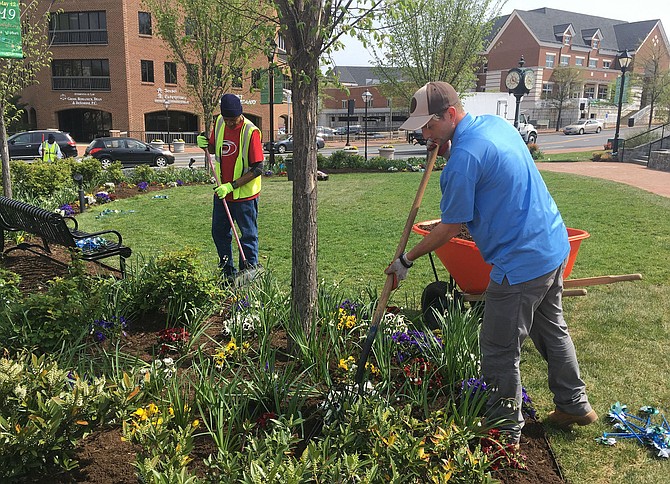 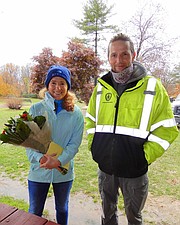 Patrick Scholzen was used to working, and did so for 35 years, until falling onto hard times. Then he discovered City Jobs – a partnership between The Lamb Center and the City of Fairfax.

“Before, I was homeless and had nothing,” he said. “But when I started working here, it was the first normal part of my life that came back.” Scholzen was speaking last Thursday, Nov. 12, in Fairfax’s Van Dyck Park, during the two-year anniversary celebration of the City Jobs program.

The Lamb Center in Fairfax City is a daytime, drop-in shelter providing food, clothing, showers, laundry services and spiritual guidance for the homeless, but it wanted to do more. And since November 2018, City Jobs has made that possible.

It’s provided employment to people desperately needing it and added workers to Fairfax’s Parks and Recreation Department maintenance crews, enabling them to improve response time and tackle deferred projects. As a result, they’ve beautified the City’s appearance, while helping the environment. Participants also extended leaf-collection and snow-removal efforts, plus planted trees throughout the community.

During the ceremony, Fairfax Mayor David Meyer had these workers stand to be recognized and applauded. He then said, “On behalf of myself and the City Council and all the Fairfax citizens, thank you.”

“This program is successful because The Lamb Center and the City are united by a common purpose and trust,” explained former Lamb Center Board Chair Tara Ruszkowski. “When the pandemic forced the City to lay off temporary staff, most of Fairfax’s public restrooms were closed. So the City Jobs crew stepped up to clean the restrooms at Stafford Park, returning in the evening to secure the facility, at no additional charge to the City.”

THE LAMB CENTER Board Chair Cathy Liverman said the center is “deeply thankful for the seasonal work opportunities the City provides our guests.” City Jobs also helps many of them, like Norman Dixon, re-enter the workforce. Dixon is now part of Fairfax City’s leaf-removal crew. Similarly, guest Joseph Fowlkes said, “You get out what you put into it. I couldn’t have gotten my foot in the door at my current job if it wasn't for City Jobs giving me a platform to showcase my hard-work ethic and leadership.”

The Lamb Center Executive Director John MacPherson said the program has “provided a path to self-sufficiency for some, and dignity and pride to all involved. Everyone involved feels better about themselves – and it isn't because of the $40 they get each day. We’re wired to work. Our guests benefit from it, the City gets tasks done that might be neglected, and the community receives safer and better-looking parks and trails.”

During the celebration, the workers wore masks saying, “Believe in the Lord,” and Meyer told them, “I’ve seen through you, actual acts of goodness, grace and mercy. We need to keep this program going. When this pandemic ends, please stay with the program because it can lead to jobs, homes, healthcare and transforming lives.” He also acknowledged Parks and Recreation Director Cathy Salgado for her support in “making this a priority for the City; it’s a great partnership.”

City Councilmember So Lim said she sees all the hard work when she walks along the Daniels Run Trail. And Councilmember Tom Ross called the workers “an inspiration to us. You’ve been a tremendous credit to this community and continue to be – and this program is exactly what we should be doing.”

“Programs like this make doing our jobs so much more rewarding,” said Salgado. “And I thank our park staff working with the crews. They’ve taught new skills, and we’ve really gotten a lot of work done. Our City streams have never looked so clean.”

“When we can make a difference in your lives – and in that of the people using our parks – it means we’re fulfilling our mission,” she continued. “Thank you so much for all you’re doing for our community, and let’s keep up that good work.”

Evan Reyle, the center’s workforce development manager, said, “It’s been the greatest, career privilege of my life to steward this program. This year, our workers collected over 1,000 bags of trash – including many things, such as an old mattress, that wouldn’t fit into trash bags. They also filled 60 bags of invasive plants and leaves and kept them from getting into our streams.”

He said they’ve also done weeding, mulching and landscaping, as well as installing a retaining wall at the dog park. But, said Reyle, “Even more important than that are the lives City Jobs has transformed.”

He then called Scholzen to stand and share his story with those attending the anniversary event. After noting he’d previously worked for more than three decades before coming to The Lamb Center, Scholzen said, “City Jobs was humbling – my resumé didn’t include picking up trash. But when you see the trails start looking good, people notice – and that’s when you realize this work means something to the community, and to you.”

“The guys and ladies I work with come from different backgrounds, situations, cultures and races, but we all come together,” explained Scholzen. “Everybody learns a little about each other, and it builds a camaraderie. But when we were homeless, if we’d see each other on the street, we’d walk right by.

“I work for the county Park Authority now. I’ve got an apartment and a car – thanks to the car ministry – and I reconnected with my family. Good things are happening.” He then thanked Fairfax City for supporting City Jobs and praised City arborist Chris Fleming for telling the workers why specific tasks need to be done, such as eliminating invasive species.

“Being homeless is never something I thought would happen in a million years,” said Scholzen. “And now, my life has had an amazing transformation, and I really appreciate it.”

REYLE said the program’s also been blessed to have veterans participating, and said it wouldn’t exist at all, if not for Ruszkowski’s hard work. He then presented her with flowers, plus a card signed by all the workers. Overwhelmed with City Jobs’ success, he added, “It’s hard to dream when everything’s fallen apart. And to see these guys dream again makes me want to cry [with joy].”

Pleased, as well, Fleming said, “I don’t have a crew, so I couldn’t get all this work done without these guys. Ten people work, Tuesday and Thursday, from 8 a.m.-noon, and it’s great to have so many more arms. They can fan out, all over a park, to pick up trash much faster than just one person could. And with brush removal and mulching, they work as a team.”

“The residents notice how much better the parks look and tell the workers they appreciate it,” he added. “So not only do the workers learn to cooperate and work together, but we all have fun, the entire time – while being incredibly productive.”