‘Don’t Be Afraid of Walking through the Fire’
Votes

‘Don’t Be Afraid of Walking through the Fire’

Fairfax woman shares her story to help and inspire others. 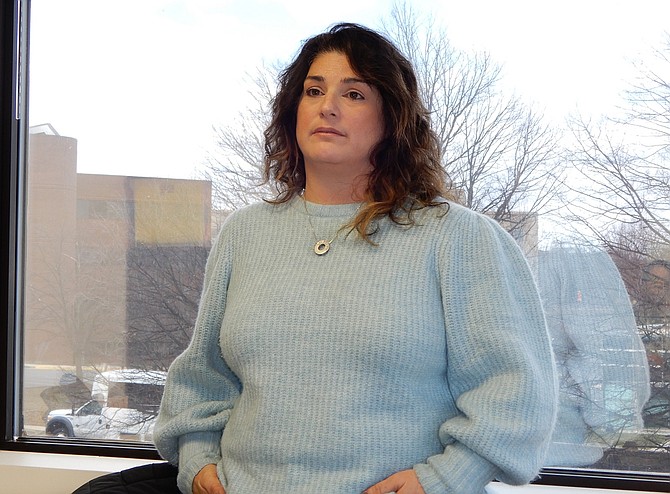 Sevana Stone listens to questions from the audience members. Photo by Bonnie Hobbs.

Speaking at a Britepaths event for local women in need, Fairfax resident Sevana Stone told her audience she’s a business owner and married lacrosse mom who lives in a nice home. She then said they might, therefore, be wondering what the heck she could have in common with them.

But as she told her story, they realized she was one of them – and then some. They also understood that, if she could overcome the hell that was her previous life, there’s hope for them, too.

“What would you say to a woman who was beaten and raped – a lot?” asked Stone. “Or to a young girl molested every night, and burned by her father? Or a woman who tried to kill herself twice, had severe meltdowns in between – and whose daughter saved her twice?”

She also told them about an alcoholic man who threw his 10-month-old daughter – her – down the stairs and locked his wife out in the cold, in winter, because she said no to him. She spoke of a woman who was robbed and then lost her home to a mortgage company that lied to her, causing her to file for bankruptcy and her husband to seek a new job.

“What would you say to a woman who loses her job, right before Christmas and can’t buy Christmas gifts for her children?” asked Stone. “If you have advice for that woman, then you can talk to me. That was my life, and I lost everything I had.”

“My mother and I were both being raped and beaten,” she continued. “And after I left, I felt more secure and protected in the gang-, violence- and drug-riddled place I moved to in Detroit than I did at home in Virginia. I started my own business, that January. And I think it’s hilarious that I now live in the suburbs, married, with three kids who play lacrosse.”

BUT HER MESSAGE was that, if she could achieve success, so could the women listening to her. “You’ve got to forge your own path,” said Stone. “It’s your choice to do it. You’ll wonder how you ever got through that dark forest, but there’s more to all of us than what’s on the outside – or inside. If you believe your life is worth more than it is now, it’ll change the way you see yourself and how you believe in yourself and what you can achieve.”

She said the only way she got to where she is now is because she listened to every boss she ever had. “I even learned from the strippers and drug dealers,” said Stone. “And I’m thinking of sharing my story with my daughter, so she’ll know there’s a world beyond her own.”

She now does employment mentoring at Britepaths and runs a business helping small businesses improve their operations. Her business motto is “Work smarter and not harder.”

“It should take less time to get more,” explained Stone. “To find a new job or start a new business, first, ask yourself two questions: How are you saving time and money, and how can others see themselves in you – and vice versa?” She then asked the attendees how she could help them and what’s holding them back.

“The fear of failure,” answered one. “You’ve got to try,” replied Stone. “And if one way doesn’t work, then try another way. What else are you struggling with? For me, it was identity – I wasn’t white enough for the whites or ethnic enough for the ethnics. English is my second language. And my family hated me for outing their brother as a monster.”

But, she stressed, “You get to choose how you react to what others do. Are you a leader? Do you believe you’re worthy?”

Another audience member said she feared change because “you’re comfortable and afraid to leave what you know.” But Stone reassured her, “I really thought the best I could be was Detroit in the ’90s. Don’t be afraid of walking through the fire – keep going through it.”

Yet another woman said she used to live with someone who belittled her. “It took me five years, but I changed,” she said. “And now I walk like I own it – with affirmation.”

IN RESPONSE, Stone said, “It takes time to really see yourself and change. But you’ve got to do it.”

Lastly, a woman asked Stone if anyone had told her she couldn’t do it. “I’ve had lots of toxic people around me, and I was easy to take advantage of,” she answered. “Life is perspective, but you don’t have to align yourself with someone else’s perspective. Surround yourself with better people. Always trust your gut and really listen to your intuition. It may be scary, but you can do this.”