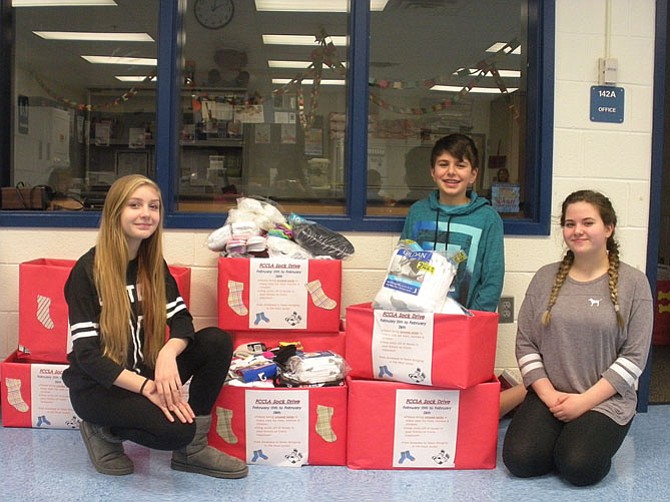 (From left) are Lanier students Jules Welch, Sami Saghir and Nora Farid with the boxes full of socks they collected. Photo contributed

Doing a good deed for others has led to state recognition for three Lanier Middle School students. They are Nora Farid, Jules Welch and Sami Saghir. In February, they collected 649 pairs of socks for the homeless, and now they’re headed to a state leadership conference.

It was the school’s first sock drive for the homeless, and all three students are in Lanier’s Family and Consumer Sciences (FACS) program and are members of the Family, Career and Community Leaders of America (FCCLA). Nora, Jules and Sami decided to collect only socks, rather than other types of clothes, after learning that socks are the least donated items of clothing.

They named their drive Toasty Toes; and in doing research for it, they discovered that the Fairfax-Falls Church region has the second-highest population of homeless people in the area. So the trio found a local homeless facility, the Katherine Hanley Family Shelter in Fairfax, to accept their donations.

The students did Toasty Toes as a community-service project for the FCCLA State Leadership Conference to be held in April in Virginia Beach. The team will be competing in the STAR (Students Taking Action for Recognition) event, Chapter Community Service Display in the Junior category. If the group wins at the state level, they will have the opportunity to represent Virginia at the National Leadership Conference this July in San Diego.

“As their adviser, I am very impressed by the imaginative community service project these three students decided to do,” said Lanier teacher and FACS and FCCLA adviser Susan VonSchaack. “The research proved that Fairfax County has a high homeless population, which I believe gave Sami, Nora and Jules even more determination in having a successful campaign.”