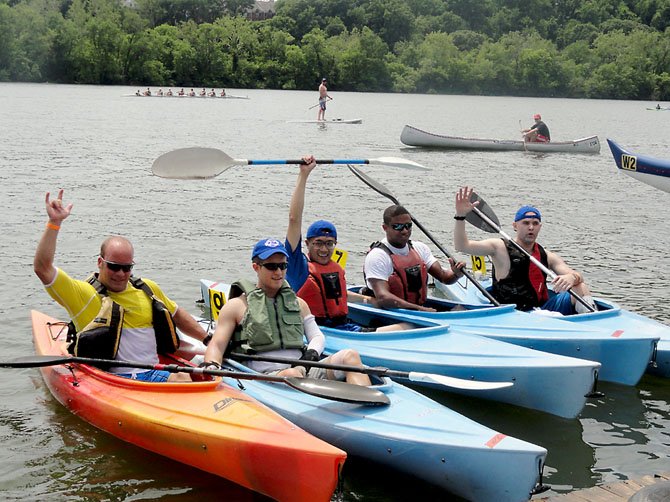 Army Sgt. Jared Lemon is fitted with a paddle to his left arm so he can partake in the 200-meter race.

For Army Sgt. Jared Lemon, 31, the National Wounded Warrior and Amputee Kayak Race on the Potomac last Saturday, May 12, was less about competing for first-place and more about enjoying a beautiful day in a familiar setting—the open water.

Lemon, an Alaska-native, had been white-water rafting and boating on the Yukon River all his life. However, this event on Saturday was the first time he got back in a kayak after losing his right arm in an IED explosion while serving in Afghanistan two years ago.

"It’s really fun to be here. I can’t wait to come back next year and be able to do it with two ‘arms’ rather than just one," he said. Lemon is waiting for a paddling prosthetic while staying at the new Walter Reed facility in Bethesda, Md. Meanwhile, he was able to complete the 200-meter race on Saturday after having a paddle strapped to his left arm. 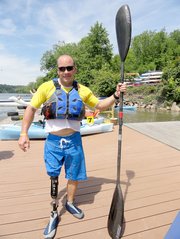 Race winner Marine Staff Sgt. Nik Miller is training for acceptance into the Paralympic Games in 2016.

THE KAYAK RACES were held at the Washington Canoe Club and were a Paralympic-qualifying event with two 200-meter sprints, one for men and another for women, and a one-mile race for men at the end. Project Enduring Pride (PEP), a Fairfax-based not-for-profit organization that holds events for wounded veterans in the tri-state area, hosted the event and gained financial-backing from sponsors Savantage Solutions, a Rockville-based government contracting firm.

While only a dozen of the 42 participants who signed up for the event actually partook, Ken Strafer, executive director of PEP and Fairfax Station VFW Post 8469 member, is confident those numbers will grow. "It’s only the first year, so it’ll build," he said. "We’ll be doing this every year from now on. It’s a great way to get these guys out of the dorm and out of their rooms."

Race winner, of both the men’s 200-meter sprint and the one-mile race, retired Marine Staff Sgt. Nik Miller, 34, couldn’t agree more. "It’s great for the soul," the Iraq War and leg amputee veteran said, adding that adventure boating in general has helped break him out of his "shell."

"You’ll see me in Rio in 2016," he said confidently, speaking about the Paralympics in Rio de Janeiro.

Miller, now a small arms trainer at the Explosive Ordnance Disposal Training and Evaluation Unit in Virginia Beach, has only been kayaking for the last 10 months, but finished the 200-meter race in just 1.14 minutes and the mile-race in 9.34.5. He said he started kayaking after establishing the Virginia Chapter of Team River Runner (TRR), of which he is also the assistant director.

The original TRR chapter, an adventure-boat program at Walter Reed that boating-enthusiasts Joe Mornini and Mike McCormick started eight years ago, helped make this kayak race possible. Not only did Mornini provide in-the-water encouragement and help when the boats flipped over, but the very idea of the event spawned from participants of their chapter. Vets partaking in the TRR Walter Reed program approached Strafer, who also works as a post-traumatic stress disorder interventionist at Reed four times a week, and asked him to organize a similar event.

TRR, a Rockville-based NFP now boasts 40 chapters nationwide and 1000 veteran-participants, operates twice a week at Walter Reed using adapted kayaks, boats and paddling equipment for disabled and amputee veterans. Mornini and McCormick take the vets out regularly to white-water raft above and below Great Falls on the Potomac.

"We’re under-utilized, under-funded and unknown," said Mornini, adding that they even have taught blind and quadriplegic veterans how to white-water raft in the Potomac. 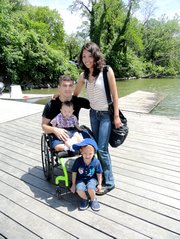 Race winner Marine Staff Sgt. Nik Miller is training for acceptance into the Paralympic Games in 2016.

To donate or become a volunteer with Project Enduring Pride, visit their website at www.enduringpride.org or to get involved with Team River Runner, visit their site at www.teamriverrunner.org.