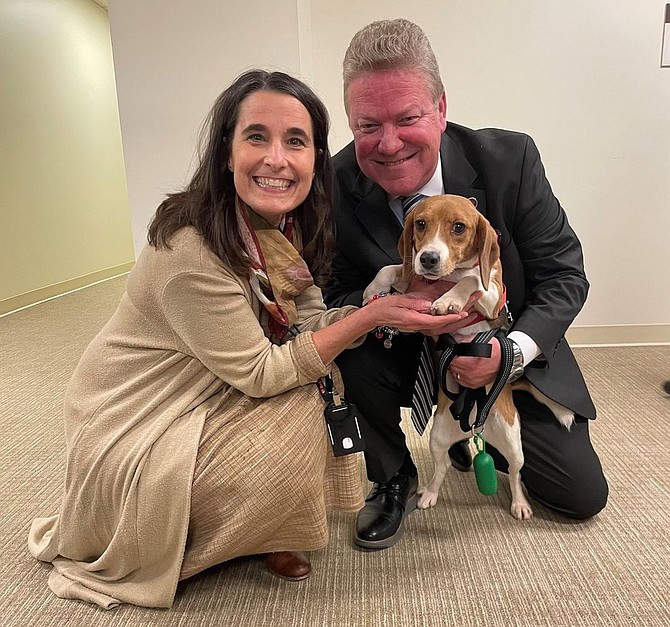 Last year’s Virginia General Assembly 2022 session was a busy one for animal protections. Legislators passed six bills, dubbed “the beagle bills,” for companion animals and considered nearly a dozen. Regulation of research animal breeding facilities were at the forefront as lawmakers grappled with how to prevent future violations at the now infamous breeding facility, Envigo in Cumberland County. Envigo bred and sold beagles for use in research in the United States and foreign countries. They were cited with a significant number of on-going cruelty violations during repeat inspections by the U.S. Department of Agriculture. The embattled company agreed to close its doors and more than 4,000 beagles were placed in adoptive homes all over the country in a settlement agreement monitored by the U.S. District Court.

Now that Virginia’s only research animal breeding facility is closed, legislators have turned an eye toward strengthening animal protections at research facilities which use animals in testing. Animal testing facilities, including private organizations, state agencies, and institutions of higher education that “confine or use animals for research, education, testing or other experimental, scientific or medical purposes,” would come under greater scrutiny with penalties for violations under the proposed legislation. Sen. Bill Stanley (R- 20th District), a frequent animal welfare champion, has introduced a bill, and along with a companion bill in the House, introduced by Del. Michael Weber (R-18), would require annual registration and fees for entities so engaged with animals, with monetary penalties for violations of animal care regulations. Another pair of bills, by Sen. Jennifer Boysko (D-33), a past sponsor of bills regulating animal research testing and animal cosmetic testing, and Del. Irene Shin (D-86), like bill in the House, seek to require annual reporting of animal use by animal testing organizations and to establish a whistle blowers fund to reward employees who report animal use violations or abuse. A bill sponsored by Del. Kaye Kory (D-38) would require Virginia’s public colleges and universities to have potential sources of research animals inspected by the state veterinarian’s office prior to acquisition, to assure animals had been raised humanely.

While dogs enjoyed most of the 2022 session’s animal welfare action, this year cats will receive some special consideration as well. Two introduced bills relate to the well being of cats: HB 1382, a prohibition on declawing, and HB1527, a bill establishing regulations for use of Trap, Neuter, Return (TNR) programs. Del. Wendy Gooditis (D-10) the sponsor of the declaw prohibition bill, and animal advocates, want to see Virginia join Maryland, New York, in preventing the practice of declawing cats. Already considered inhumane and seldom practiced by Virginia veterinarians, rescues, or shelters, the procedure was once a popular elective surgery for cat owners who wished to protect furniture from cat’s scratches.

Dr George Coty, of Alexandria, an advocate of the bill, says that “Scratching is a normal, instinctive behavior for cats. They just need to be taught what they can scratch, like posts and pads made of sisal, cardboard, carpet and wood.”

Pulling their claws through a resistant surface is a daily routine for cats in order to mark territory, exercise muscles, relieve stress and remove worn nail sheaths. For cats spending time outside, claws are essential for defense and hunting prey. The declaw surgery is major, called onychectomy, a procedure which removes bone, sensory and motor nerves, the nail beds and claws. It requires amputation of the first knuckle of each front claw; akin to removal of a human finger or toe at the first knuckle. Surgical recovery is painful with the potential to result in chronic, lifelong pain. That pain may result in a change to the animal’s gait and intolerance of some surfaces including litter boxes and carpet, for pain avoidance. Many groups, including the American Veterinary Medical Association (AVMA) and the American Society for the Prevention Cruelty to Animals (ASAPCA) have strongly discouraged declawing, unless medically necessary, for example, due to bone infection or cancer in the nail bed, and then only to affected digits, not all toes. The simplest non-surgical alternative is to regularly trim nails to blunt the tips.

Although a similar bill was filed last year without passage, Trap Neuter Return proponents have re-introduced a bill this year under the sponsorship of Del. Kelly Convirs-Fowler (D-21). TNR programs, used throughout the Commonwealth, attempt to deal with the overpopulation of feral cats, those living outside on their own, not as household pets. The law would codify the legitimacy of such programs and protect volunteers in the program from charges of animal abandonment. The bill also would set requirements for animal handling, trap identification, record keeping, and set fines for non-compliance.

The bill is likely to renew the battle of cat people versus bird people. In 2013, “Nature Communications” published a systematic review and quantitative study of mortality caused by cats. The study estimated wildlife kills by free-ranging domestic cats at 1.3 - 4.0 billion birds, and 6.3 - 22.3 billion mammals, annually. Unowned cats, opposed to owned pets, were cited as the cause of the majority of the mortality. Leading bird groups, such a Audubon, oppose allowing house cats to roam and the re-release of feral cats. Cat people argue, however, that TNR programs serve as an aid to the bird kill problem since they stifle feral cat population growth. Groups such as Alley Cat Allies, founded in 1990, cite TNR programs “as the only humane and effective approach for community cat management.”

A bill affecting both dogs and cats is HB1984, requiring continuous access to potable water.

The bill, sponsored by Del. Kaye Kory (D-38), co-chair of the General Assembly Animal Caucus, would update Virginia’s existing code definition of “adequate water” to mirror required water access in the federal Animal Welfare Act (AWA). In May 2020 the AWA was changed and has required that potable water be continuously accessible to dogs. For cats, if potable water is not continuously available, it must be offered not less than twice daily for at least one hour each time. Only an attending veterinarian can restrict water from that standard.

No change was made to Virginia’s code language for comprehensive animal care at the time of the federal change in 2020. Kory’s bill will put the federal and state laws in sync again. In addition, Kory’s bill adds guidance on water delivery sourcing based on scientific knowledge of dog and cat natural drinking behaviors. According to university researchers, dogs thrust their tongues with power into water, pulling water behind the tongue, with three laps moving water toward the back of the throat [Crompton, Alfred; Musinsky, Catherine; and Reis, Pedro; “ingestion and intramural transport in Canus familiars”, Royal Society Journal Biology Letters, 2011; http://doi.org/10.1098/rsbl.2011.0336]. Cats drink a bit differently as explained by Virginia Tech professor Sunghwan Jung who researched drinking behavior in cats. “Cats place their tongue on the water surface and then lift the tongue very rapidly and create the nice column of water. Before the column pinches off …they bite the column of water and drink it.” With dog’s need to insert the tongue into water, and cat’s need to touch the tongue surface and create a water column, the practice of using small mammal drip bottles for expediency at certain facilities does not meet the definition of providing “adequate water” in a suitable manner to the species and type of each animal” as required by current Virginia code. Kory’s bill provides that guidance.

Animal advocates will push for passage of a prohibition on animal killing contests for coyotes and other fur-bearing animals. Animal advocates are likely to oppose legislation related to roadside zoos introduced by newly elected Del. Ellen Campbell, who filled the vacancy created by the death of her husband Ronnie Campbell (R-24). Last year Ronnie Campbell sponsored a zoo related bill which was held over during the 2022 session. This year’s bill would make cruelty seizure of animals at road-side zoos more difficult for State inspectors by eliminating animals defined as “livestock” from seizure language.

The roadside zoo in Natural Bridge drew national attention in 2019 for the zoo’s poor treatment of Asha the elephant. The zoo agreed to pay $41,500 to settle six of nearly 150 violations of the Animal Welfare Act cited by the USDA and was subject to animal seizures related to inadequate care, and even animal bludgeoning as a form of euthanasia. The zoo has only one elephant who has resided there without the company of other elephants for over 30 years. Recently, the animal welfare group In Defense of Animals placed the Natural Bridge Zoo on their list of the ten worst zoos for elephants in North America.

These animal bills will be heard in agriculture subcommittees in both houses in the coming weeks. Those deemed to have merit will proceed for consideration by their full agriculture committees, before moving to the Senate and House floors for vote. Those passed by each body will crossover to the other body and if successful, move to the governor’s desk for final enactment.