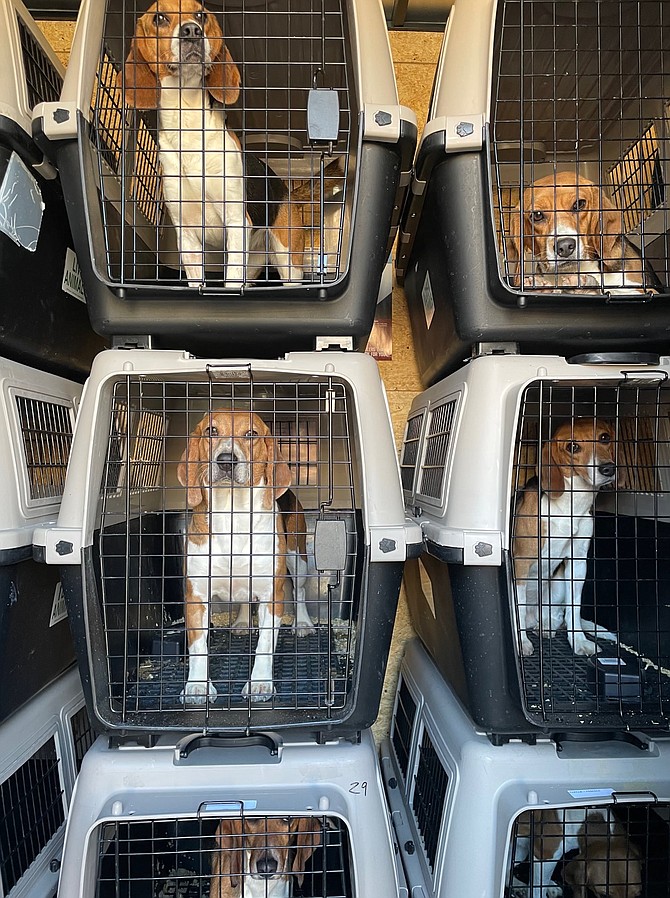 Several Virginia legislators this week signed their names to an appeal to save 80 beagles used in toxicity tests by two out-of-state pharmaceutical companies. The dogs were slated for euthanasia at Inotiv’s Mount Vernon, Indiana laboratory after tests commissioned by Crinetics Pharmaceuticals of San Diego California. In their letter of appeal to the top executives of the companies, Virginia legislators were among 160 legislators from 32 states requesting the dogs be given an opportunity for adoption.

Such adoption is already a matter of law in Virginia. In 2021, Virginia Code (§3.2-6593.1) was amended to add a requirement that any animal testing facility that no longer has need for a dog or cat in its possession shall offer the release of the animal for adoption. In this year’s General Assembly session, the section was amended by Senate Bill 90, sponsored by Senator Bill Stanley (R-20th), to make breeders of research dogs and cats subject to the same requirement as testing facilities. The bill was one of five bills known collectively as “the Beagle bills” which sought better protections for “companion” animals bred for or used in research.

The “Beagle bills” engendered a rare show of bipartisanship in the often divided General Assembly. In a statement at a signing ceremony for the bills on April 4, Gov. Glenn Youngkin said,   “Today, I’ll sign five bills, and those five pieces of legislation, on all of them, every single voting member of the General Assembly voted for them. Today’s remarkable achievement brought every single Republican and Democrat together to protect our four-legged constituents. This historic package of bills I signed today clarifies that dogs and cats bred and sold for experimental purposes are protected by Virginia’s cruelty-to-animals law, will help ensure welfare standards and save lives, and will give Virginia the authority to take action when welfare violations occur.” (See “Governor Signs Bills to Protect Research Dogs & Cats,” Connection, Springfield, May 7-13, pg. 5, 15)

The five beagle bills were inspired by the repeated animal welfare violations uncovered at the Envigo beagle breeding facility in Cumberland, Virginia.

The poor conditions were discovered in an undercover operation by People for the Ethical Treatment of Animals (PETA) and later confirmed by inspectors from U.S. Department of Agriculture’s Animal and Plant Health Inspection Service (APHIS) which formally cited the company.  Envigo was cited for multiple critical violations in multiple inspections.

Similarly, treatment of beagles at Inotiv, Envigo’s sister company in Indiana, was revealed in April, after a seven-month long undercover operation by the Human Society of the United States (HSUS). Their undercover operation discovered potential violations of the Animal Welfare Act, including failure to provide adequate veterinary care, failure to minimize animal pain and distress, and failure to ensure proper staffing. In one example of many cited by HSUS, one beagle was used to test a substance so toxic that it brought him near death after only two days of dosing. Although in obvious pain and unable to stand, he was left to suffer overnight because the veterinarian was unavailable on a weekend evening; the beagle was euthanized the following day.

While acknowledging pharmaceutical companies and the Food and Drug Administration have a responsibility to ensure drugs are safe for humans, animal welfare groups, and increasingly legislatures, are calling for changes to animal testing for more humane treatment of all animals. HSUS notes “nearly 90% of drugs tested in animals ultimately fail in human trials, and a large proportion of these failures is attributable to unexpected toxicity in humans… even after animal tests.”  Groups point to alternatives to animal testing, including in vitro tests using cell lines, tissue samples, alternative organisms such as bacteria, three-dimensional modeling and bioprinting, in silicon tests, computer modeling and in-human microdosing trials.