Stories of the path to dog ownership. 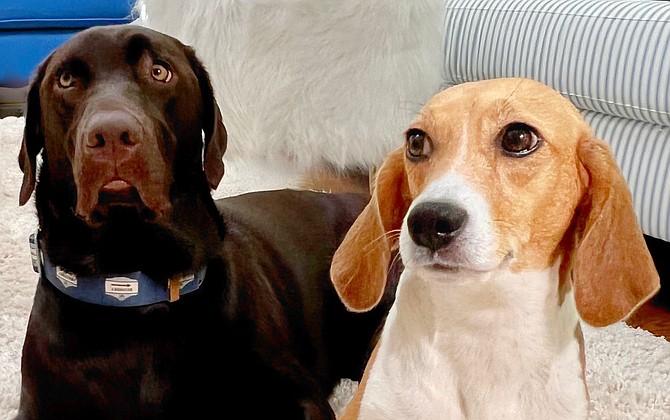 Bitsy, after two years used as a breeder at the Envigo facility, is calmed by the presence of her new family and “brother” Moose, a Lab

For many northern Virginians, having a family dog is an absolute must.

This, even though dogs have been relieved of their traditional jobs for watch, livestock guarding/herding, and hunting, performed in earlier decades and more rural settings. In today’s suburbia, the only “job” most family dogs have is companion. Just as varied as the number of dog breeds, are the reasons why people still elect to have a dog, and so too, the reasons why they select a particular pooch to be part of their lives.

Some might seek a dog like one from their childhood, to remind them of a past favorite or carefree times, or one that has an attribute they find particularly appealing, such a long ears or a clown-like behavior. A breed may be popular through association with a movie; such as Dalmations and Cocker Spaniels in Disney movies, or Pugs in “Men in Black”.  Or a breed may be known through connection with a famous person, such as Queen Elizabeth’s Corgis, or President Lyndon B. Johnson’s Beagles.

Sadly, there are more dogs available than can fill the homes of dog lovers.  The American Society for the Prevention of Cruelty to Animals (ASPCA) estimates that 390,000 dogs are euthanized every year. Recognizing that high number of unwanted healthy dogs, it’s become a source of pride and “badge of honor” to rescue a pet from a community shelter or rescue organization. Adopting families often are quick to share that they have helped by adopting one of the approximately two million dogs that find a home each year after entering a shelter. A common response one hears when asking about a dog is: “He’s a rescue,” or “We’re not sure of her age/breed/background; she’s a rescue.” These owners don’t need to know the details. They are committed to giving the dog a home.

At the opposite end of the spectrum, other owners are keen to own a “purebred” dog; to contribute toward preservation of the variety of 199 dog breeds recognized In the United States by the American Kennel Club (AKC) and 360 breeds officially recognized world-wide by the World Canine Organization. From the tiny as a teacup Chihuahua to the giant Great Dane, full breed dogs are bred to exacting standards and requirements of the breed’s intended use or job. National organizations and breed clubs seek to maintain the purity of breeds by maintaining registries and lineage records.

These days, few owners will admit to buying a dog from a puppy store, a “backyard breeder,” online seller, or along a roadside, as these sources have become notorious for high prices, unhealthy stock, sourcing from factory puppy mills with horrid conditions, and even making buyers into victims of selling scams where there is no actual dog provided.  Unfortunately, too many potential dog owners are unaware of the options for finding a puppy, the buying hazards of the loosely regulated pet industry, and comparative purchase prices when looking for a new family member.

Meet two dogs; one a rescue with a nationally publicized back story, and one a pure breed not commonly found in the United States.  Arguably, they are at the extremes of what a dog goes through to end up in the same place — a loving family home.

VERMONT IS A BEAGLE. He was recently adopted by Andy Crook and Donna Ann Winterling of Chantilly. At just four months old, he is already a celebrity wherever he goes. He is one of more than 4,000 beagles who started life at a medical research breeding facility in Cumberland Virginia.  After federal citations for cruelty under the Animal Welfare Act, he was one of the 4,000 Beagles surrendered in a settlement overseen by the United States District Court. The story drew national media coverage as the facility closed. The Beagles were transported in small groups by the Humane Society of the United States (HSUS) to shelters and rescues throughout Virginia and around the country. Vermont is one of the first group of 16 beagles to come to the Fairfax County Animal Shelter. The shelter is working with HSUS to find family homes for several, facilitating final placements and much better lives for the rescued dogs.

Beagles, a small breed, are described as merry, amiable, even tempered, intelligent, gentle, determined and happy-go-lucky. Part of the Hound group, the Beagle breed was developed in Great Britain primarily for hunting rabbits in the 1830s. They became very popular in the United States, holding a position in the top ten most popular breeds in the AKC’s registry for many years. Beagles, Uno and Miss P, won the large and prestigious Westminster Dog Show in 2008, and 2015, respectively.

Beagle fanciers, the Winterling-Crooks had heard the Envigo Beagles’ story in national news coverage and on social media. They were determined to give one of the rescued beagles a home with them and their ten year old Beagle, Utah, and began watching for availability at local shelters. When Crook saw six would be available the next day at Fairfax County Animal Shelter while drinking his 6 a.m. morning coffee, he and his wife quickly hatched a plan. Winterling would camp at the Shelter door on Friday morning at 8 a.m. in preparation for the opening at noon. Neither the rain nor the wait deterred her, and she was first in line. She passed the time waiting by volunteering her help with shelter tasks: loading pet food into a van and making up kitty litter boxes. Other potential adopters started showing up after 9 a.m. and an adoption queue formed behind Winterling.  Near opening time, Crook arrived with their beagle Utah, for the recommended existing family dog meet and greet. Their well executed plan worked. Winterling said, “We were done with the whole adoption process in under an hour. So we did officially adopt the very first Envigo beagle from FCAS.”

About two weeks have passed and Vermont, whose shelter name was Joe Pye, (all named for wildflowers) is busy learning new things, just as any young pup would be doing. (See The Connection, Springfield edition, August 11, page 8) Unlike most other pups, spending his first three months at the breeding facility, he knew only a concrete floor and caged kennel environment, and had limited human contact. Since being with his new family, he learned to climb stairs in two days, to jump up on furniture in three days, to “escape” his designed level and explore the whole house during the day, and cuddle between his human parents in the evening . He is adapting to crating at night and house training, with only a few “accidents.” He enjoys bothering his older “brother” Utah for play bouts, and likes to watch dogs on television. It’s unclear if he’s glimpsed himself on TV in his celebrity persona. He does enjoy that bit of celebrity status when out and about as people ask “Is he one of those beagles?” given away by the tattoo on his ear that will be a lasting reminder of how close he came to a far different life than the one he is now enjoying to the fullest.  It’s clear that the rescued medical research beagles are winning hearts in the Commonwealth and beyond. The Crook-Winterling’s, and even Utah, are heartily in that number.

NEXT MEET Ryder. He is a Hovawart. His breed, originating in Germany, is considered “rare” in the United States. So rare that Ryder’s people, Ann Kisling, of Occoquan, and her husband Rick, brought Ryder to Virginia all the way from Slovenia. The Slovenia breeder’s was the closest litter they could find after a prolonged internet search. In fact, the breeder found them after their previously unsuccessful inquires to the U.S. national Hovawart breed club.

As a former competitive cat fancier, Kisling knew more about the hazards of internet dog buying than the average person. After the contact, Kisling carefully researched the breeder and her site for evidence of responsible breeding. The breeder’s site highlighted her adult dogs and their accomplishments and information on breeding, rather than including testimonials from puppy buyers, and selling and shipping information. The site showed the breeder concentrated on the single Hovawart breed with a limited number of dogs and breedings over the years, and showed strong participation in dog competitions where her dogs, champions, were judged. Beyond the championship titles there was evidence of testing for hereditary disorders prior to breeding for both her dams and the sires. All positive signs since puppy mills typically have multiple breeds, a large number of dogs, frequent litters, and no evidence of peer review, genetic information or testing.

Hovawarts, large dogs, are described as alert, faithful, kind, extremely intelligent, and with even dispositions and protective instincts. They are part of the Working Group, used for watch, guarding, tracking, and rescue; their name is derived from German words for “watch-yard”.

Kisling was attracted to breed’s loyalty, companionable traits, and ability to bond to one person.  She plans to enter Ryder in conformation competition early, when he is a few months older.  Conformation refers to visible structure and appearance. Conformation shows are not beauty pageants but a measure of how well a particular dog compares to the “ideal” or agreed “standard” of the breed. It’s where a dog “earns” the right to breed, since fanciers want only the best examples as sires and dams to continue the breed line. Though every dog owner may think their dog is “the best”, the sport and serious business of conformation dog shows provides an opportunity for impartial peer review and judgment.

Ryder may or may not go on to father future generations of Hovawarts in the United States.

But for now he is enjoying the puppy life and enrichment activities of exploring new territories, making new friends, and learning basic commands given by hand signals. He loves water and walks on park trails, already walking close by Kisling’s side. He too is winning hearts and being a good ambassador for his less common breed.

Surely the debate will continue on solutions for the problem of overpopulation of dogs. Some owners will continue to favor rescue and others will favor strict adherence to limited responsible breeding. Those seeking a dog are urged to be wary consumers. To think carefully about the commitment they are making to a life-time of care for the dog so they don’t add to the numbers filling shelters. Responsible ownership demands careful investigation of the source, or relying on area shelters and rescues to help make a connection with the right dog for the family situation that will last.  As American writer Carolina Knapp put it, “Before you get a dog, you can’t quite imagine what living with one might be like; afterward, you can’t imagine living any other way.”