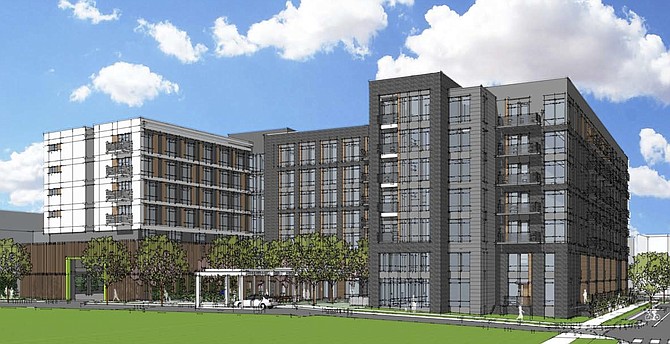 Artist’s rendition of the senior-living building by Brightview.

Before Fairfax City Council last week approved the new plan for Northfax West, nearly two dozen residents called in with comments during the online public hearing. And the majority were opposed.

Resident John Sullivan said he belongs to the Izaak Walton League, a conservation group, which is also opposed. “We have to design and plan for the post-COVID era,” he said. “Nobody’s going to want to move into a senior-living facility like that, with such density. And calling something twice as wide as a sidewalk a ‘linear park’ is patently absurd.”

Garrett Smith’s backyard touches the property being developed; so, he said, “I have a personal interest in this. I paid nearly half a million dollars for my townhouse, two years ago, because it backed up to green spaces, trees and wildlife – and nobody told me this was being built here.

“I worry about flooding and privacy issues from the new townhouses,” he continued. “And what’s the long-range traffic plan for this project? Consider the human impact of this proposal and vote no.”

Matt Moore, who lives in Smith’s neighborhood, was concerned about the senior-living building’s height, but supported the overall project. “Water issues in our community have been compounded by nearby construction, and we hope this project improves some of the problems.” Moore also liked the trail to Cobbdale and its park, but worried about construction traffic potentially damaging his neighborhood’s roads.

Katie Frasier was not happy, at all. “When are you going to protect our environment after 600 trees are bulldozed and a stream is buried?” she asked the Council. “And shoehorned townhouses aren’t meeting the vision of the Comprehensive Plan. This is next to I-66 and should primarily be commercial.”

She said residents there “bought their property with environmental and other protections in place. We love the woods behind our houses, and you’re letting us down. This is about the developer’s greed.”

“Green spaces make our City special,” said Erin Frank. “Let’s keep them and not replace our natural resources with townhouses. Please deny or postpone this proposal.”

Agreeing, Patricia Quintana said, “If approved, the City will be voting against its own environmental-protection goals and destroying 5 acres of Resource Protection Area [RPA].”

Katie Johnson also pleaded with the City to save the natural resources there. “The Council holds the power to do the right thing,” she said. “Just because you can amend the RPA and Chesapeake Bay Ordinance doesn’t mean you should.”

But Arthur Hammerschlag favored the plan. “It restores Accotink Creek in Van Dyck Park, reduces flooding in adjacent neighborhoods and improves the intersections,” he said.

Ronald Tyler lives adjacent to the Perry Street/Howerton Avenue intersection and bought his property because it was next to the creek, so he opposed the extension of the culvert into that area, as well as the trail near his home.

Cobbdale’s Chase Wiley said, “We shouldn’t be taking down all these trees and culverting a stream. Cobbdale’s a cloistered community and we oppose that trail – and the developer didn’t tell us about it.”

Fairfax County ecologist Chris Ruck said this stream is “actually in the top 11 percent of all the county’s streams” and questioned the “reliability and accuracy of the applicant’s data saying the stream was in bad shape.” He also worried that “they’re digging a 10-12-foot deep, 50 feet wide pit for stormwater management adjacent to the tot lot and townhouses.”

“Removing most of the trees in the RPA is just wrong,” said Douglas Lillard. “The developer is interested in profit, not in being a steward of the environment.”

Betsy Bicknell, however, wanted the project approved because of the Accotink Creek restoration. She said that, overall, it would degrade the wildlife habitat, but the Chesapeake Bay would be improved by the better stormwater management.

But Cynthia Seabring was opposed, saying, “We need to maintain green spaces; we don’t need more buildings. We need a healthy ecosystem in our area.”

Douglas Stewart, with Fairfax City Citizens for Smarter Growth, said the project “will provide a new, street grid and new uses and will connect Farr Avenue and Orchard Street to create a more walkable City – as will the trail connecting to Cobbdale. And there’s an opportunity to provide more affordable housing on site.”

Also in favor, Michael Fabio said, “We need strong development in that area to encourage others nearby to develop, too. And we need this for our City tax revenue to keep providing the services we all enjoy.”

Former Mayor John Mason agreed. “It’s crucial for development of a major commercial area in Northfax,” he said. “Don’t turn this down.” And in the end, the Council approved the project unanimously.