Focus on Children and Refugee Rights 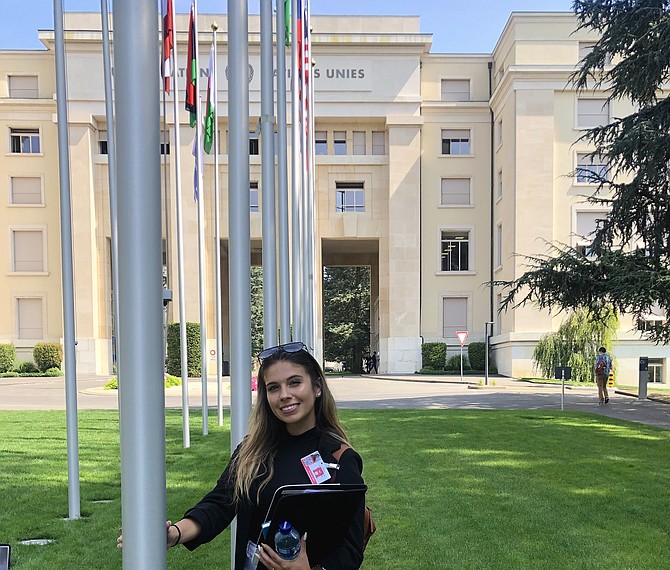 Nicol Martins of Fairfax in a visit to the UN office in Geneva, Switzerland in July 2019. Photo contributed

Ferrum College alumna Nicol Martins, from Fairfax, was accepted into the International Affairs and Diplomacy master’s program affiliated with the United Nations Institute for Training and Research (UNITAR). She will emerge from the program with a master’s degree in international affairs and diplomacy.

In conjunction with the master’s program, UNITAR invited Martins and other program members to visit Geneva, Switzerland in July 2019. While there, Martins met with United Nations members and learned more about the various UN agencies.

Martins’ passion has always been for human rights. After receiving her bachelor’s degree in international studies from Ferrum College in May 2017, Martins worked for a due diligence company in Washington, D.C. that researched specific individuals and entities from all over the world. “If you had asked me a few years ago what I wanted to do after college, I would have responded: ‘to work with human rights, specifically children [and] refugee rights,’” Martins wrote in a social media post announcing her trip to Switzerland. “The United Nations was always a dream.”

“Nicol has always had a passion for helping people and international affairs,” said Director of Graduate and Online Studies and Martins’ advisor at Ferrum College, Sandra Via. “While at Ferrum, she melded those passions in almost everything she did. She would come to my office to discuss international issues and the impact they were having on the world. Nicol used her class research papers and projects to further hone her interests and understandings, which culminated into her international studies capstone project on the Syrian refugee crisis.”